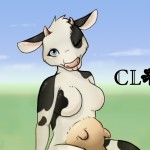 Clover (formally Melinda, but tends to go by her second name) is my female alt, and as such she represents my feminine side to some extent. She also embodies my love of all things bovine (and, by extension, all things uddery). She's quiet, but unashamed. Voluptuous, but dainty. Harmless, but able to defend herself.

She's not without her kinks either; while they are largely interchangeable with Cyrin's, she is more likely to stumble into situations involving lactation, milking, weight gain and, curiously, plushification.

Importantly, Clover is not a female version of Cyrin, she's not Cyrin if he transformed into a cow, and she has a life of her own. She might sometimes be seen with Cyrin, but they don't follow each other around and I wouldn't say that they share much more than a quiet acknowledgement that they have something in common.

Some important details about Clover: